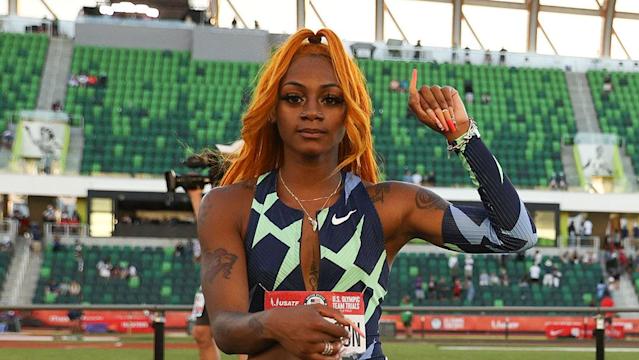 As a freshman at LSU, Sha’Carri Richardson broke the 100m record at the NCAA Championships with a time of 10.75 seconds. She was in the top 10 of fastest women in history at 19 years old. Back in April of this year, Richardson ran a new personal best with a 10.72 seconds 100m, which made her the 6th fastest woman of all time. She won the 100m at the United States Olympic Trials which qualified her for the 2020 Summer Olympics. At 21 years old, Sha’Carri is stamped as one of the best runners of all time & the fastest woman in America right now. She’s a fan favorite & it seemed nothing could stop her.

Then, news came out that she failed a drug test. She wasn’t on any performance enhancers but she tested positive for weed. This will stop her from competing in the 100m at the Olympics as she’s accepted a one month suspension. There’s still a chance she participates in the 4×100 relay, but as of now it’s unknown if we’ll see the superstar sprinter representing America in this year’s Olympics.

It’s unfortunate that weed will keep Richardson from competing in her signature event which she dominates. But, the rules are the rules. Jianchor’s very own Dax Hill has first hand experience with the protocols & process of testing as he was once in the testing pool as a top swimmer in the world. Listen to him provide some insight on how this all works in relation to Sha’Carri’s situation, as seen in our most recent episode of I Got Next.

Sha’Carri Richardson is handling this situation very well. She took blame, admitted her faults, & accepted the consequences. With everything she’s dealing with, it says a lot about her. She chose weed to cope with the passing of her mother & I’m not going to tell her what to do in that situation. However, if it can help anybody reading, I wrote about Holistic Healing methods & the potential benefits that come with them.

Should Weed Be Banned From The Olympics?

The real issue here is that the rule is outdated. Marijuana is much more accepted worldwide than it once was & the benefits have been publicized at a higher rate. The major leagues in America have become more lenient with marijuana recently. The Olympics should consider doing the same. The message it gives is that painkillers are fine, but weed is where we draw the line.

Dax sums it all up perfectly here: